Both the newspaper and the foundation were unimpressed by the MCC’s lawyers’ attempt to silence us. The Mail & Guardian again published the complete uncensored text of our call for free access to natural and traditional health therapies in South Africa in this week’s edition, and it was followed shortly afterwards by the Sowetan, City Press, and Ilanga.

The background to our signature campaign is an unprecedented attack by the MCC on natural health therapies and traditional medicines in South Africa. The motivation behind this attempt to outlaw natural health is the trillion-dollar pharmaceutical investment business’s attempt to eliminate all competition posed to its market by safe, effective and affordable natural therapies.

The bogus justification advanced by the MCC for this proposed legislation is consumer safety. But the fallacy of this is revealed by the fact that while no one has ever died from safe natural therapies, the deadly side effects of pharmaceutical drugs kill more than a million people every year.

Any litigation brought against us by the MCC in an attempt to block the truth will backfire. At trial, the MCC will finally have to disclose its secret membership lists and the identities of all its ‘external experts … from … medical and pharmacy schools’ (per MCC website), who make its decisions. They will be cross-examined in open court on their past and present financial ties to the pharmaceutical cartel – the scandalous rule rather than the exception worldwide.

As the deadly side effects of Vioxx and other pharmaceutical drugs come to light, more and more people are seeking answers in effective and affordable natural health therapies. The MCC’s attempt to outlaw natural health in South Africa on behalf of the pharmaceutical cartel is a last desperate bid to shore up the cartel’s collapsing monopoly on world health based on patented synthetic dugs. This attempt and threaen health of many businesses all over the world.

The MCC is the pharmaceutical cartel’s Trojan Horse within the South African health service. Whereas the South African government has advocated natural health in its national health policies and at the international level within Codex Alimentarius – where it has taken the lead in promoting natural therapies rather than restricting them – the MCC is currently seeking to ban public access to life-saving natural therapies, in conflict with the government’s position.

The people of South Africa will not tolerate the MCC’s attack on their right to natural health and its attempt to sabotage their government’s enlightened position on natural therapies.

Dr. Rath was born in Stuttgart, Germany, in 1955. After finishing medical school he served as a doctor and researcher at the University Clinic in Hamburg, Germany and the German Heart Center in Berlin. His examination centered on the problems of …

END_OF_DOCUMENT_TOKEN_TO_BE_REPLACED 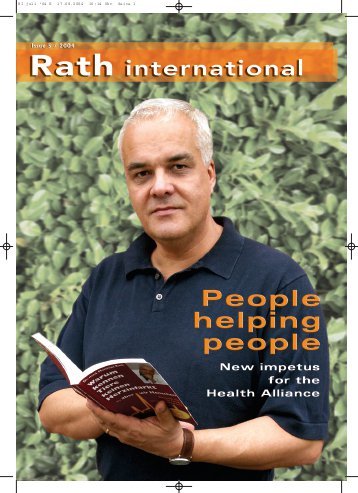