Judges affirm: “TAC forces the government to spread disease and death among the people of South Africa! “

In an historic verdict the High Court of Cape Town exposed on March 3, 2006, one of the most appalling, unethical and inhumane activities in South Africa since the end of Apartheid. The demo- cratically elected government of South Africa is being forced by pressure groups – largely financed by foreign money – to distribute toxic ARV drugs to millions of AIDS patients. The ARV pushing pressure group named in the verdict of the High Court is the Treatment Action Campaign (TAC).

BACKGROUND TO THIS HISTORIC VERDICT

Masked as a ‘humanitarian’ organization pretending to help AIDS patients, the TAC has been pushing the rollout of highly toxic ARV drugs for years and has been forcing the South African government to spread disease and death among the people of South Africa. Over the past two years the Traditional Healers Organization (THO), the Treatment Information Group (TIG) and the Dr. Rath Foundation Africa have spearheaded a public information campaign that took the Samaritan mask off the TAC’s activities.

The TAC has been exposed to the people of South Africa for what it is: an unscrupulous pressure group that encourages people to take harmful ARV drugs that will kill them and as a group that organizes rented crowds for the drug industry.

With its true business exposed, the TAC saw no other option than to go to court in a desperate attempt to mask its unscrupulous activities. They wanted the High Court of Cape Town to issue a gag order to prevent any further exposure. The TAC knew it ran the risk that the High Court would imme- diately look behind its ‘Mother Theresa’ cover and identify the true business of the TAC as an organisation that – among other things – is spreading disease and death among the people. But apparently the TAC saw no other way out.

To minimize this risk of its true nature being affirmed by the High Court, the TAC organized an 8 month long fanfare in South African mass media, whitewashing its unethical busi- ness and attacking anyone who exposed it – including the President and the Minister of Health of South Africa. With this strategy the TAC and its backers tried to put pressure on the High Court. Not surprisingly, many of the newspa- pers and TV stations who joined in this obvious strategy were owned by foreign stake holders sharing interests in the multi-billion business with AIDS drugs.

But the High Court did not fall for these tricks. The judges of the Cape Town High Court need to be applauded by the people of South Africa and the international community for their courage to stand up to the tremendous pressure from these foreign interests.

After eight months of careful deliberations the High Court ruled that the majority of exposures about the TAC’s busi- ness are correct, and they will not be interdicted.

From the very beginning, the High Court was aware of the public interest in this case, far beyond South Africa. The deliberation time of eight months reflects the thoroughness and responsibility of the judges.

After this thorough deliberation, the judges now affirmed the most devastating exposures of the TAC, including that it helps promote disease and death among the people of South Africa. By doing so the judges encouraged a public debate about the TAC and related interest groups that will lead to the demise of this organization and thereby help to save millions of lives.

For the first time in the history of Democratic South Africa the High Court found the following to be truthful statements about any organization in South Africa:

• “The TAC organises rented crowds for the drug industry.”

The background for this statement: For years, the TAC had been literally renting children and young adults from the poor communities especially around Cape Town and stirring them up to march against their own government pushing for the distribution of ARV drugs. The benefactors of the distribution of these toxic drugs, of course, were not the AIDS patients – but the multi-billion dollar drug industry.

• “The TAC pays people to participate in its demonstrations.”

The background for this statement: Because the people of South Africa would not voluntarily march for such dubious goals as the distribution of toxic drugs, the TAC had to actu- ally pay its demonstrators. Since the TAC members do not pay membership fees to finance the TAC activities, the hun- dreds of thousands of Rand of ‘bribe money’ come mostly from foreign donors.

• “The TAC encourages people to take med- icine which is harmful to them and will kill them.”

• “The TAC forces the government to spread disease and death among the peo- ple of South Africa.”

The background for this statement: Not since the end of the apartheid regime has the verdict of a South African court cast a more devastating light on any organization in the country. The ruling of the Cape Town High Court affirms the outrageous fact that the activities of the TAC force the gov- ernment of South Africa to deliberately spread diseases and death among its very own people!

• “The applicant destabilises democracy in

The background for this statement: The actions of the TAC not only harm the people but also aim at destabilizing South African democracy. By forcing the government to pay billions of rand to import ineffective but toxic ARV drugs, the TAC action aims at economic drainage of the South African econ- omy.

This, in turn, will lead to shortages in funds for other impor- tant social projects, including food, housing and education. Thus, the TAC ultimately aims at creating political unrest and destabilizing democracy in South Africa.

The background for this statement: ARV drugs are highly

ciency of AIDS patients. The toxic nature of ARVs explains why most people taking them also develop tuberculosis and other infectious diseases. South African health statistics show that most of the patients taking ARV drugs die within four years.

• “The TAC forces the government to spend millions of Rand on toxic drugs.”

The background for this statement: Because hardly anyone in the South Africa can afford to pay the toxic – yet still expensive – ARV drugs, the only way the drug companies can make money in South Africa is by making the govern- ment buy these toxic drugs from drug companies and dis- tributing them to the people.

Since the government’s money comes from the tax pay- ments of the people, the TAC indirectly forces the people of South Africa to pay for the distribution of drugs that harm them. Any government that refuses to harm its own people must be applauded and supported by the people.

The following facts were also established during this litiga-

• The TAC has received hundreds of thousands of rand directly from the Rockefeller Foundation.

• The Rockefeller Foundation is the tax shelter of the Rockefeller investment group, the largest stakeholder of the pharmaceutical industry worldwide.

While the High Court affirmed that the TAC “organizes rent- ed crowds for the drug industry” it also ruled that the above facts are not sufficient evidence for a direct funding of the TAC by the pharmaceutical industry.

These aspects obviously deserve further investigation. However, the High Court’s affirmation of the devastating consequences of the TAC’s activities for the lives of mil- lions of people – render all other aspects secondary. 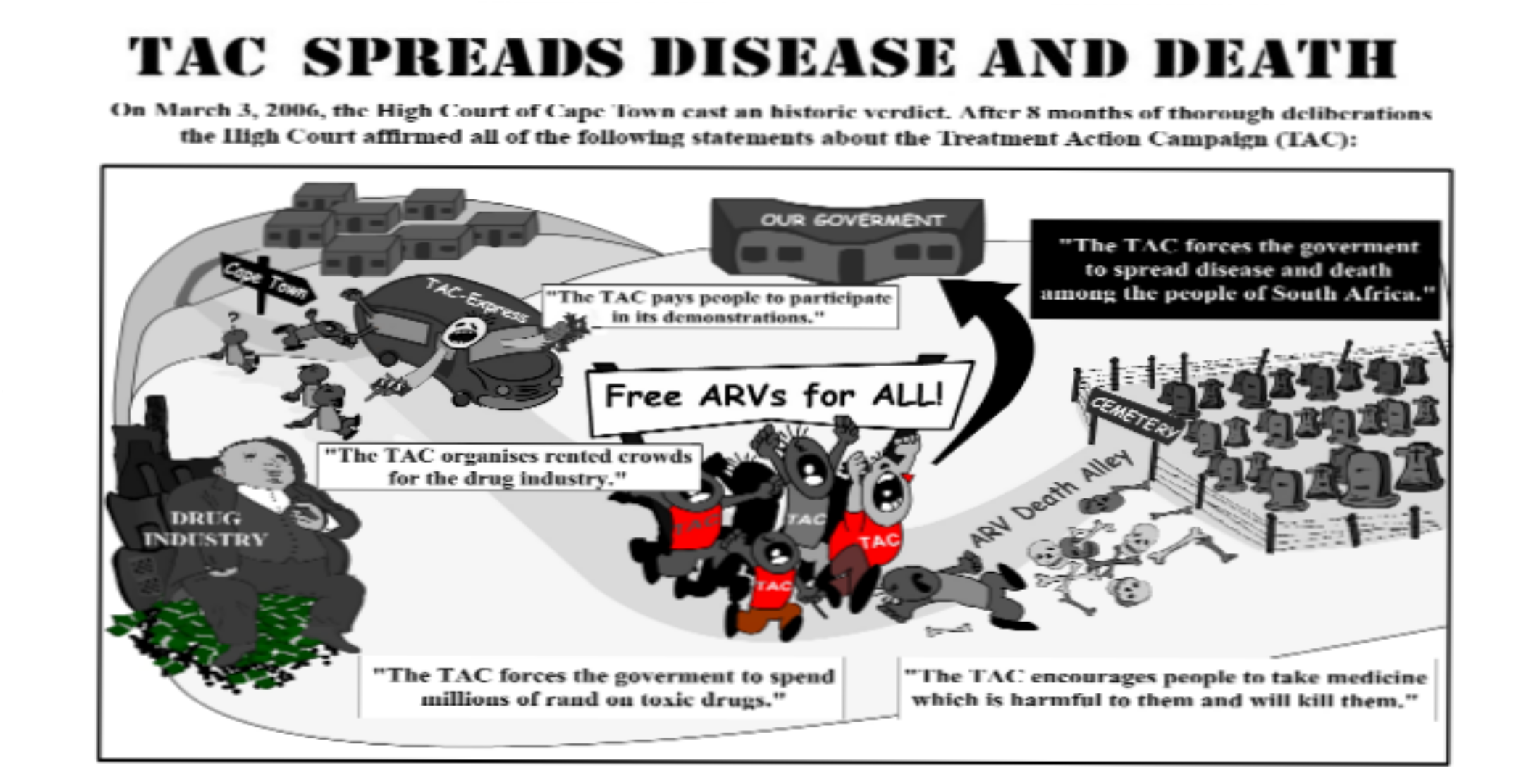 CONSEQUENCES OF THE COURT VERDICT FOR THE TAC AND ITS SPONSORS

The TAC knows that this verdict of the High Court destroyed its mask as a Samaritan organization forev- er and exposed it for what it is – an unscrupulous pressure group promoting toxic drugs at the expense of the health and lives of the people.

Not surprisingly, the TAC representatives reacted furi- ously. In their anger, they not only continue to attack the government of South Africa and the Dr. Rath Health Foundation but they also publicly attack the High Court, e.g. for having taken the necessary time for this important decision.

has just received a deadly blow to its credibility – dealt to them by the High Court.

And not surprisingly, the only cheerleaders willing to play the tune to the TAC’s funeral parade are some newspapers and TV stations controlled by the stake- holders of global pharmaceutical interests.

The consequences of this High Court verdict for the national media or international sponsors supporting the TAC are the same: If they stick to their support they too will pay the price as the unscrupulous sup- porters of an organization helping to spread disease and death among the poor.

CONSEQUENCES OF THE VERDICT FOR THE THE PEOPLE OF SOUTH AFRICA

We believe that with this important and well-prepared verdict, the High Court wanted to send a message that is understood far beyond the borders of South Africa and the shores of the African continent: The people of South Africa are aware of the foreign influence in our country and we are no longer willing to protect inter- est groups that force our government to spread dis- ease and death among its own people.

The political consequences of the decision of the high court are obvious. No organization that is found to promote toxic drugs and that risks the lives of millions of people has the right to exist, let alone to continue its unscrupulous activities in the country.

that act against the health and life interests of their people. The decision of the High Court about the activities of the TAC paves the way for similar legisla- tion in South Africa.

Dr. Rath, the founder of the Dr. Rath Health Foundation comments: “By unmasking yet another organization that helps to spread dis- ease and death across the country we have made an important contribution to the people of Africa and to the liberation of Africa from debilitating economic dependency. The coura- geous and historic verdict by the High Court of Cape Town encourages the people and the gov- ernment of South Africa to take the necessary action and rid the country of this and other undue burdens.”

Causing harm and death to people is a criminal act in any society. After the exposure of the TAC as an organization that does just that

it is now up to the people of South Africa to act.

Dr. Rath was born in Stuttgart, Germany, in 1955. After finishing medical school he served as a doctor and researcher at the University Clinic in Hamburg, Germany and the German Heart Center in Berlin. His examination centered on the problems of …